Navigating the Ups and Downs of the Natural Gas Industry

Oklahoma’s oil and gas industry is in the midst of a swift drop in new wells after what has been a successful year in production. This coincides with the Oklahoma Corporation Commission’s recentdecision to set its newest cap on natural gas production in an attempt to stave off plummeting natural gas prices.1 High production and low demand have traditionally dictated the shaky nature of the natural gas world, despite the hope of many that natural gas will become more central to our nation’s economy. 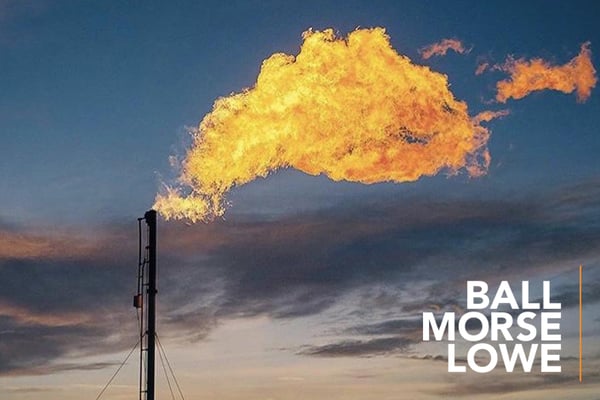 The OCC traditionally imparts caps on production when natural gas prices drop to unsustainable levels. This trend of unsustainable prices is a hallmark of the natural gas industry. So what effect, if any, does capping production on the most prolific producers have on the price? This is the question the OCC seeks to answer.

Only recently has natural gas established its place as an important resource for the United States economy and environment. The advent of horizontal drilling and hydraulic fracturing in long-standing shale plays resurrected the dwindling oil industry and brought production of associated gas along with it. Associated gas reserves and non-associated gas reserves are the two primary sources of natural gas. Associated gas is a byproduct of crude oil. Non-associated gas is produced independently of oil. Associated gas has traditionally been unwelcome, and is usually disposed of through injection, flaring, or venting. The associated gas accompanying oil production is the cause of the massive flaring across the United States. Oklahoma appears to have stronger gas-capture and transport capabilities than many of the states that are most often mentioned for heavy reliance on venting and flaring.

The nation’s biggest natural gas players are more focused on avoiding waste, rather than maintaining natural gas as a viable energy source. Although natural gas is one of Oklahoma’s biggest contributions to the nation’s oil and gas industry, our state is a relatively small player in the national natural gas market. Thus, its impact on price, if any, would be difficult to detect. In 2018, Oklahoma ranked fifth in the United States in billion cubic feet per day, behind Texas, Pennsylvania, Louisiana, and Ohio.2 It is not unusual for states like Texas to cap natural gas production on their most prolific wells, but this is done with an eye on preventing waste of precious natural resources by flaring. Oklahoma, which has been essentially absent from the discussion surrounding flaring, does not appear to face the same waste concerns as these more prolific states.

Flaring is the venting and burning of natural gas during oil production when the well is not producing gas in economically feasible quantities. Operators resort to flaring because natural gas capture and transport infrastructure lags behind that of oil. In North Dakota, ranked eighth in natural gas production in 2018,2 the flares of by-product natural gas have been visible from space. It is difficult to compare the OCC’s cap with that of other states, because these states are more focused on flaring limitations due to a lack of gas capture and transfer infrastructure. Oklahoma does not struggle with the same issues of capture and transportation as these other states.

Oklahoma has been a historic center for oil and gas refining and transportation.3, 4 The state’s central location within the United States makes it the perfect candidate for interstate transport of natural resources. It is likely that Oklahoma’s strong ties to the refining industry made it uniquely prepared for the capture and transport of natural gas. Oklahoma has been virtually absent from the conversation surrounding venting and flaring, despite its growing contributions to natural gas production. Looking across the state, it is not unusual to see pad sites and pump jacks, but it is rare to see the glow of heavy flaring. It is apparent that many states could learn a lot from Oklahoma’s capture and transport infrastructure.

It certainly seems as though new drilling has slowed dramatically in response to the OCC’s decision, but it is more likely a case of correlation, rather than causation. For the past decade, the hope of the oil and gas industry has been in the “cleaner” alternative to oil – natural gas. With growing demand for environmental and atmospheric stewardship, natural gas has shown promise as the next best energy source behind oil. However, our country’s infrastructure doesn’t appear to be responding to this promise. Upticks in the manufacture and use of natural gas vehicles, specifically for long haul transport industries, have been seen; and many home utility providers have made the switch from coal to natural gas. However, this slowly shifting demand has been unable to keep up with the astronomic surge in production of natural gas accompanying the shale revolution. The supply and demand standoff with regard to natural gas will continue to exist until we build a more natural gas friendly nation.