Oklahoma Race-Notice Considerations:  Can an Affidavit or 'Notice' of an Oil and Gas Lease Provide Constructive Notice?

Under Oklahoma’s Statute of Frauds at 15 O.S. §136, certain types of contracts, including contracts 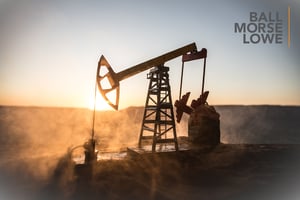 involving conveyances of real property or modifications thereof, require that the terms of the transaction be memorialized in writing and signed by the party to be charged, or the party against whom specific performance is sought. Cloud v. Winn, 303 P.2d 305, 308 (Okla. 1956). Because a lease of mineral interests is a conveyance of real property, an oil and gas lease must be in writing. Further, an instrument affecting rights in real estate must be filed in accordance with the recording requirements of Title 16 of the Oklahoma statutes to be valid as against third persons. See Amarex Inc. v. El Paso Natural Gas Co., 1987 OK 48 ¶ 14, 772 P. 2d 905, 908.

The Oklahoma legislature has defined three types of notice by statute. 25 O.S.§ 11 defines actual notice as “express information of a fact” whereas constructive notice is defined by 25 O.S. § 12 as “notice imputed by the law to a person not having actual notice.” 25 O.S.§ 13 goes on to identify a third type of notice (referred to as imputed notice or inquiry notice) that “Every person who has actual notice of circumstances sufficient to put a prudent man upon inquiry as to a particular fact, and who omits to make such inquiry with reasonable diligence, is deemed to have constructive notice of the fact itself.” Although the recording statutes do not address whether mere inquiry notice would be sufficient to defeat the claim of a subsequent bona fide purchaser under Oklahoma’s recording statutes, Oklahoma courts have indicated that inquiry notice may be considered a type of actual notice. See e.g., Cooper v. Flesner, 1909 OK 137, ¶¶ 12-13, 103 P. 1016 , 1020.

In Tenneco Oil Co. v. Humble Oil & Ref. Co., 1969 OK 6, 449 P.2d 264, the Oklahoma Supreme Court upheld the claim of a prior purchaser of an oil and gas lease as against a subsequent bona fide purchaser who recorded their oil and gas lease before the first lessee. However, prior to the date of recording of the top lease, an assignment of the first oil and gas lease had been filed of record, wherein the original lease was described by reference to its parties and the date. The court found that because the assignment of the first lease placed the subsequent lessee on inquiry notice of the existence of the first lease, the subsequent lessee had a duty to inquire about the original lease. Although the first lessee prevailed in this case, this case does not address the issue of whether an instrument that is accepted for recording and actually recorded, even though that instrument is unrecordable, is sufficient to establish inquiry notice.

Oklahoma statutes establish requirements for the recordability of instruments as necessary to provide constructive notice. 16 O.S. § 16, states that "Every conveyance of real property acknowledged or approved, certified and recorded as prescribed by law from the time it is filed with the register of deeds for record is constructive notice of the contents thereof to subsequent purchasers, mortgagees, encumbrancers or creditors." However, 16 O.S. § 15 states that "Except as hereinafter provided, no acknowledgment or recording shall be necessary to the validity of any deed, mortgage, or contract relating to real estate as between the parties thereto; but no deed, mortgage, contract, bond, lease, or other instrument relating to real estate other than a lease for a period not exceeding one (1) year and accompanied by actual possession, shall be valid as against third persons unless acknowledged and recorded as herein provided.” Thus, even if an instrument is accepted for recording by the office of a county clerk, these statutes indicate that in order to provide constructive notice, an instrument must meet the requirements for recordability.

A recorded affidavit not acknowledged by all parties to the transaction does not appear to qualify as an instrument that provides constructive notice under 16 O.S. § 16, because even though the affidavit was actually recorded, it was not eligible for recording under 16 O.S. § 16. In Crater v. Wallace, the Oklahoma Supreme Court rejected the use of a recorded affidavit documenting a partnership’s claim to real property as an attempt to impart constructive notice: “Is knowledge of that single fact alone sufficient to create a suspicion in the mind of a person of reasonable prudence that third persons claimed an interest in the land? We have already pointed out that the affidavit was not entitled to record under the statutes. It would therefore hardly seem logical to suggest that plaintiffs would be legally bound to examine a record which the law did not authorize to be made.” Crater v. Wallace, 1943 OK 250, ¶ 16, 140 P.2d 1018, 1020.

Further, the Oklahoma Title Standards specifically state that an affidavit is not, in and of itself, a conveyance contemplated by 16 O.S. § 16, and cannot substitute for an actual conveyance.  In addition, although 16 O.S. § 82 authorizes the use of affidavits to affect title to real property for the purpose of establishing rebuttable presumptions of the existence of facts in certain matters set forth in 16 O.S. § 83, the existence of an oil and gas lease is not one of the matters specified by 16 O.S. § 83. Further, although there are numerous special statutes specifically enacted by the Oklahoma legislature to permit certain types of affidavits to impart constructive notice of facts affecting real property, the legislature has not enacted legislation specifically permitting an affidavit of an oil and gas lease to impart constructive notice.  See, e.g., 58 O.S. § 711 (setting forth requirements for filing a notice of probate decree or judgment in lieu of a copy of the actual decree or judgment); 52 O.S. § 87.4 (setting forth requirements for an affidavit of pooling election to provide constructive notice of the pooling rights claimed under the election); and 16 O.S. § 67 (affidavits of heirship involving severed mineral interests owned of record by decedents).

Although there may be an argument that recording an affidavit of the existence of oil and gas leases would place prospective subsequent lessees on inquiry notice (assuming such an affidavit contains all information necessary to impart inquiry notice, e.g., identity of the lessors, a proper and accurate legal description of the lands covered by the lease, the effective date of the lease, the lease term, etc.), it is unclear whether such an affidavit would be sufficient to impart inquiry notice if the affidavit does not meet the requirements of recordability set forth in 16 O.S. §§ 15-16. Consequently, in the absence of specific legislative authority to permit affidavits of leases to serve as constructive notice of the existence of numerous unrecorded oil and gas leases, the better practice is to either record copies of the leases themselves; or record separate memoranda of leases for each lessor, containing words of grant, and properly executed and acknowledged by both the lessor and lessee.

Articles and blog posts attributed to Ball Morse Lowe are written, contributed to, and edited by BML attorneys, staff, and team members.