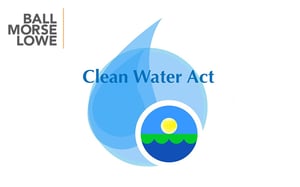 Navigable Waters Protection Rule, effective December 23, 2019. In doing so, the new rule has changed certain aspects of the 1972 Clean Water Act (“CWA”). When Congress passed the CWA, it established that all “waters of the United States” or “WOTUS” would be under federal protection, with WOTUS commonly been defined or understood to be “navigable waters”1 in the United States of America. However, there has historically been various levels of debate and uncertainty as to what waters are truly protected under the CWA.

In 2015, the Obama administration, assisted by the U.S. Army Corps of Engineers (“Corps”) and the Environmental Protection Agency (“EPA”), enacted the 2015 Clean Water Rule. The goal of this rule was to clear up uncertainty, provide clarity and was intended to give scientific guidance to assist the Corps and EPA with their decisions as to what waters were protected under the CWA. Under Obama’s rule, waterbodies protected by federal law captured and included much smaller bodies of water, in an effort to stop pollution found in smaller waterbodies from reaching larger water sources, including sources used for drinking water.

The amendments to the 2015 Clean Water Rule have essentially removed large portions of the science-based standards put in to place in 2015, removing certain waterbodies across the nation from the protections of the CWA. The waterbodies that have been cut will no longer be under the federal clean water standards, but instead will now operate under the scope of state and local jurisdiction and regulations.

From the standpoint of environmentalists, Trump’s new rule “is going back to the lowest level of protection we’ve seen in the last 50 years, leaving millions of Americans vulnerable to polluted water.”2 The EPA has also stated that the new rule conflicts with established science and runs counter to the objectives of the CWA.

Larger environmental groups are already preparing to sue. More recently, a coalition of fourteen (14) states have brought suit, arguing that the new rule “ignores studies showing how small bodies of water…connect with and impact larger bodies of water more typically targeted for regulation.”

From the standpoint of farmers and other industry groups, many feeling Obama’s Clean Water Rule “was too far-reaching,” Trump’s new rule will help reduce unnecessary federal oversight. Proponents of the new rule also believe that a “diminished federal role would leave greater share of water supervision to the states.”3

However, as seen with most new laws, various levels of legal challenges can be expected, regardless of which side you fall on. Only time will tell if our nation is capable of agreeing on a definition for WOTUS. Until then, most will have to wait and see if our water is perceived to be better protected under one rule as opposed to the other.